Most Americans have either experienced firsthand or know about the problem of high prescription drug prices. Drug prices are three times higher in the U.S. than in other countries. Moreover, for years they have increased much faster than the rate of inflation. When it comes to drug prices, transparency definitely matters. Granted, in many cases, the task of filling a prescription is often mundane: Get a prescription from your doctor, nurse practitioner or other provider; go to your local pharmacy, show them your insurance; make a co-payment of $10 for a generic $20 – maybe $50 for a brand. Unfortunately, for millions of Americans, that’s just not the case. They flat out can’t afford it or their payment is a real financial burden: that's the case for uninsured and underinsured people.

Some of the most expensive drugs literally cost millions. In fact, one such drug called Zolgensma costs $2.1 million for five-year gene therapy to treat a rare pediatric disease. While that’s an extreme case, more common drugs to treat heart conditions, COPD, diabetes, depression, or hypertension can cost thousands of dollars a year, especially when it’s a patented drug with no generic alternative. Monthly retail prices for the asthma drug Flovent are about $300 per inhaler; for the type 2 diabetes drug Januvia about $585; and for the antipsychotic drug Latuda about $1550.

If you want to delve into the policy realm of this matter, keep reading. If you’d rather get right to the nuts and bolts about why transparency in drug prices internationally and domestically helps right now, then scroll down to the section about “Using Drug Price Transparency Now to Help you Save Money.” 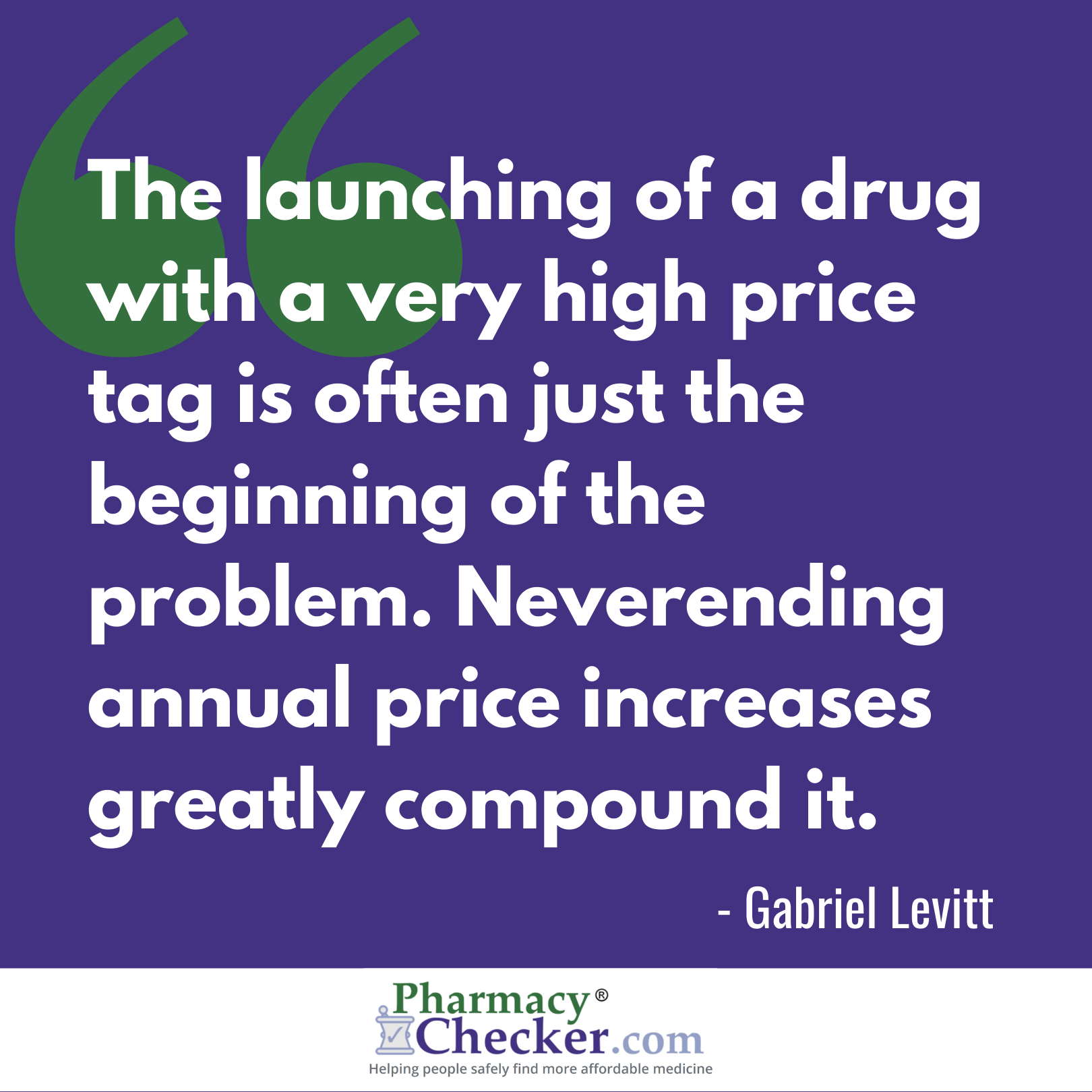 As a matter of public policy, advocating greater drug price transparency has not been my highest priority. That’s because I’m more interested in policies that will more directly lead to lower drug prices in America. Furthermore, while conventional economic theory holds that price transparency leads to better market efficiency, including lower prices, things are more complicated when patients become consumers of healthcare goods and services. Most importantly, perhaps, health law experts warn against treating healthcare services and products like regular consumer goods. Why? Because people without medical training may not be the best judge of which healthcare services and goods they need or where they should get it.

When it comes to prescription drugs, however, the benefits of transparency for consumers are clearer. The patient (consumer) already has a prescription (medical expertise) from their providers. Now they need to go find the lowest price.

Politicians and government officials are seriously focusing on drug price transparency at the federal and state levels. During the Trump administration, the Secretary of U.S. Department of Health and Human Services (HHS) created new rules to force drug companies to list prices in drug ads and hospitals to make prices for various services and procedures – and drugs – public. The rule imposed on drug companies was blocked in federal court on the grounds that it exceeded the authority of HHS. The rule for hospitals, in contrast, went into effect this year.

One of the nation’s top experts on healthcare costs, the editor in chief of Kaiser Health News, Elizabeth Rosenthal, MD, stated:

[…] as the current administration works to reverse the actions of its predecessor, it should recognize that former President Donald Trump introduced some policies on medical care and drug price transparency that are worth preserving.

Dr. Rosenthal believes that consumers are empowered by hospitals having to make public the cost of drugs. Another result is that large price discrepancies for the same products in different hospitals and clinical settings will narrow.

The biggest actions on drug price transparency are at the state level, with efforts underway since 2017. Many bills have been introduced and passed. In 2019, a “2.0” drug transparency initiative was launched by the National Academy for State Health Care Policy (NASHP). According to NASHP, 36 bills have been introduced and 18 have become laws in 14 states.

WHEREAS the Legislature finds that greater transparency in the current opaque pricing and payment environment for prescription drugs will be a critical tool in developing strategies to address rising drug prices and managing State budgets in a responsible manner; now, therefore…”

One of the main goals of these efforts is to force drug manufacturers to provide data that explains the price of a drug in order to justify it. Big Pharma’s big mantra is that drug prices need to be so high in order to support research and development to bring about new drugs. Is that true? It’s well-known that drug companies often spend more on marketing and advertising each year than on research and development. That doesn’t square with what they are saying. To shine a bright light on the truth, state laws require drug companies to provide data on research and development, manufacturing, marketing, advertising, and administrative costs for many prescription drugs.

The launching of a drug with a very high price tag is often just the beginning of the problem. Neverending annual price increases greatly compound it. Infamously, the price of critical and popular brand-name insulin products has tripled since 2002. Prices for asthma inhalers have seen great increases as well. Prices for Flovent and Advair Diskus increased by 41% and 56%, respectively, between 2013-2018, according to GoodRx. The state drug transparency laws force drug companies to explain those vicious price increases.

Finally, there are drug price spikes. Those happen with both brand and generic drugs, but most often with off-patent drugs where a drug company has cornered the market with special treatment from the FDA called “exclusivity.” In these cases, drug companies have literally increased a drug price by 5000%.

Related: Ways to Save on Asthma Inhalers

While it’s the drug companies that control the price from the beginning of the cycle (aka - the list price), other entities in the drug supply chain contribute to high prices. Most notable among them are pharmacy benefit managers (PBMs), companies that negotiate prices with drug companies on behalf of insurers. PBMs are often criticized for negotiating lower drug prices but then not passing along the savings to health insurers and, more importantly, patients. State drug price transparency laws require PBMs to share certain data that would show how much profit taking vs. helping patients spend less is going on.

Finally, wholesale pharmacies the companies that buy prescription drugs from manufacturers in large quantities, distribute and sell them to your local pharmacies, also affect prices. The state laws seek out their profit margins as well.

So what? How does this lower my damn drug prices?

Even the most vociferous among transparency advocates recognize the policies’ shortcomings, namely that they don’t lower drug prices at all! What good is it to learn that drug companies are greedy? Didn’t we know that already?  There is a proverbial light at the end of the tunnel. The greed will be so deeply understood that it will empower policymakers to best target solutions that will actually force drug prices lower. In a Q&A on drug price transparency policies, NASHP states:

The data reported by manufacturers, PBMs, wholesalers, and insurers will provide a basis for effective state action based on an awareness of the highest-cost drugs and the factors contributing to their high prices across the supply chain.”

Those effective state actions include:

With a full picture of what goes into the price of a drug, states and the federal government will have stronger legs to stand on as they finally do something to take on the drug companies – and the rest of the drug supply chain.

Using Drug Price Transparency Now to Help you Save Money

To date, government efforts on drug price transparency have not really helped the average American consumer looking for more affordable drugs. Also, those efforts appear not to focus on drug prices at the retail level, the ones that consumers must contend with.

For most products that consumers buy, such as smartphones, computers, furniture, food, etc., price shopping is commonplace. It’s easy to find their prices in the store or online – including on the many price comparison sites out there. You can compare prices of a Chromebook vs. the MacBook Pro, an iPhone vs. Android, hamburger meat vs. sirloin steak, etc. They also have an expectation of the price discrepancies. An iPhone 11 is about $700 with 64GB. There may be a “deal” for $650 or you may overpay at $750, but greater price differentials than these would probably surprise you.

When it comes to prescription drugs, the price differences can be as great as 99%. I’m not exaggerating.

You see, second to the inexplicability of high drug prices are the discrepancies among drug prices, not only internationally (i.e., Canadian drug prices are lower) but even domestically, from one pharmacy in your neighborhood to the next.

Domestically, the same drug can cost $150 at one pharmacy and $10 at the pharmacy across the street, In fact, the differences can be even greater. Luckily, there’s transparency. Over the past 10 years, many companies have sprouted up to provide that transparency with GoodRx being the big elephant in the room. According to GoodRx: “the lowest GoodRx price for the most common version of atorvastatin is around $12.00, 93% off the average retail price of $188.94.”

And of course, there’s my favorite drug price comparison website, PharmacyChecker.com. The lowest price search on PharmacyChecker for 90 pills of atorvastatin with a discount coupon where I live in Brooklyn is $12.12.

PharmacyChecker began comparing drug prices internationally in 2003, an early mover in the drug price transparency department! For popular generic drugs, like atorvastatin, the lowest prices in the U.S. are often substantially lower than in Canada and even countries with lower drug prices than Canada.

For brand-name drugs, it’s the total opposite. For the asthma drug Flovent, one inhaler in the U.S. can cost over $300. In Canada: $133. The lowest cost Flovent inhaler internationally is $87. To put this discrepancy into even greater contrast, let’s look at the cost of obtaining Flovent over a longer term to the uninsured American at a U.S. pharmacy vs. an international online pharmacy. Three-month supply $900 vs. $204. Annually: $3600 vs. $816! On PharmacyChecker, this obscene price nightmare is brought into the light. International drug price transparency has market power. Most importantly it means the difference between a patient taking and not taking a life-sustaining medication.

Remember, above, I wrote that the drug price differences can be 99%. In 2015, the price of a lifesaving drug called Daraprim, which treats a serious infection called Toxoplasmosis, infamously increased overnight from $13.50 to $750 per pill. A former hedge fund manager turned drug corporation CEO bragged about it. That very day, the same drug could be purchased for $5 online from a licensed pharmacy in the United Kingdom. 99%. Things haven’t changed much since then, as PharmacyChecker transparently shows you the domestic vs international prices of Daraprim.