The Top 10 Prescription Drugs You Should Not Get in Canada

When it comes to prescription drug affordability in 2022, Canada isn’t always the answer. If a patient is prescribed a generic medication, the coupon price at their local pharmacy often beats out the potential savings that await them at online pharmacies. PharmacyChecker looked at the top ten most searched for generic medications on PharmacyChecker.com to reveal that these commonly-prescribed drugs are an average of 54.76% cheaper if purchased from local U.S. pharmacies with a coupon rather than ordered internationally from a vetted online pharmacy. The low Canadian drug prices people often talk up are those on patented, brand-name drugs, which are much more affordable when ordered online from reputable foreign pharmacies that ship to the United States – not only from Canada but from Australia, India, New Zealand, Turkey, and the UK among others.

The conclusion being that, if clinicians and patients were hoping to find a great deal on a generic prescription, they should not be discouraged to find lackluster international online pharmacy prices. Uninsured or underinsured patients can greatly benefit from free discount coupons for use at local pharmacies, right here in the United States. Many pharmacies auto-apply some of these cards. Still, it does pay to at least try a few codes at the counter to walk away knowing you got the best deal. Other benefits to using a discount coupon are perhaps obvious: There is no international shipping wait time for the patient, lessening the chance of interruption in critical drug therapies. Establishing a psychological contract with a pharmacist – something that can certainly be strengthened through face-to-face service at a local pharmacy rather than an online consult – has shown itself to improve adherence. The positive effect it has on local business communities, also, cannot be overstated.

Lisinopril, a commonly-prescribed medication to treat high blood pressure, is around $0.34 a pill through an international mail order pharmacy. Relative to brand blood pressure heavy hitters, such as Eliquis, which runs a patient about six bucks a pill, this may sound like a deal. But lisinopril is just $0.10 a tablet when bought domestically with a U.S. pharmacy discount coupon –  i.e., 70.59% cheaper.

Sildenafil, the active ingredient in famed erectile dysfunction drug Viagra, can be ordered internationally for as little as $0.42 per tablet. It’s $0.40 per tablet with a coupon at a U.S. pharmacy like Walgreens or the local mom-and-pop. In the case of sildenafil, the international vs. local price differential is so narrow, patients might as well stay in the neighborhood.

Why are generic drugs often cheaper in the U.S.?

Unlike brand-name medications and first-to-market generics, which are generally granted 180 days of market exclusivity, there is substantial price competition among multiple manufacturers for the majority of generic drugs sold in the United States. In Canada, the Patented Medicine Prices Review Board controls the prices for medicines under patent (brand name drugs), but it does not control prices on generics. As Canada is a smaller market compared to the United States, fewer manufacturers compete, ergo the high generic prices in Canada.

Generic Drugs That Are Cheaper in the United States vs. Canada 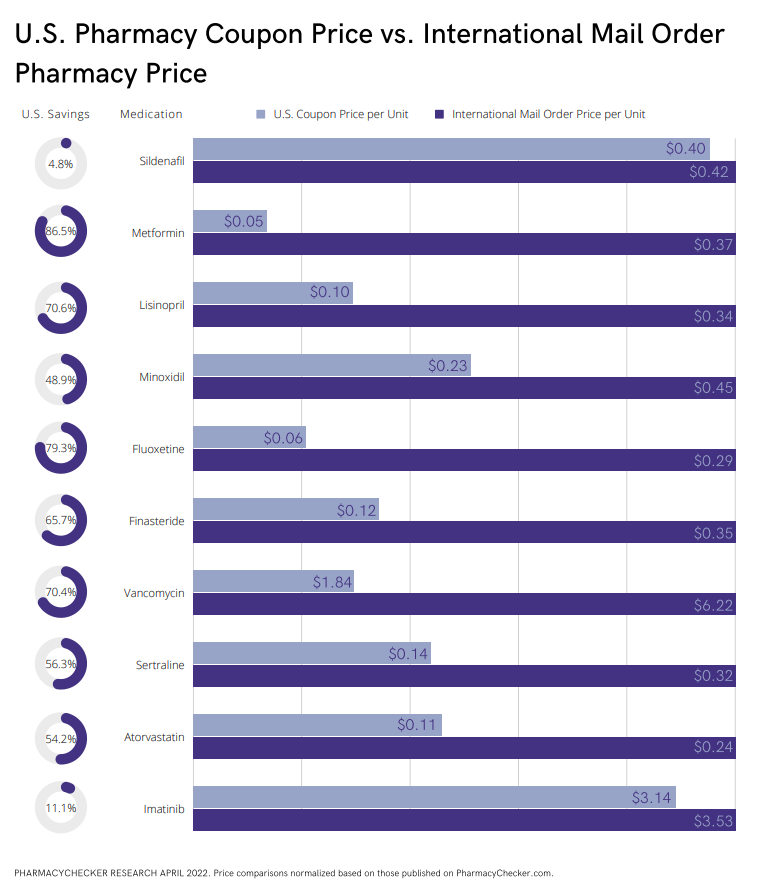