How does the Inflation Reduction Act affect prescription drug prices?

You may have heard that the Inflation Reduction Act (IRA) will lower drug prices in America. Let’s cut the politics and lay down the facts here. I’m going to start with the good news: What you’ve heard is true! At long last, Congress has passed, and President Biden has signed legislation that will lead to drug price relief for many tens of millions of Americans.

It’s also good news that the beneficiaries of this legislation are Medicare enrollees, about 64 million people, most of whom are Americans 65 and over; our parents and grandparents who generally are in most need of prescription drugs to stay healthy and alive. The average older American takes four prescription drugs.

The bad news: Over 200 million Americans will not directly benefit from lower drug prices under the IRA. These are largely the uninsured, about 30 million, and then 184 million privately insured persons. A ray of hope here is that the IRA will require greater transparency among drug manufacturers, which could translate to lower drug prices overall, but only time will tell.

We want to let you know how this may affect drug prices for you moving forward.

The IRA addresses drug prices in the following ways:

The IRA lowers certain brand drug prices in Medicare through negotiations between the Secretary of Health and Human Services and drug manufacturers.

The IRA will cap out-of-pocket spending on prescription drugs in Medicare to $2000 per year. It will also cap the cost of insulin at $35/month. In some cases, monthly caps will apply so that people can spread out their drug spending over the course of the year.

Medicare can finally negotiate drug prices (but with serious limitations)

The IRA infuses sanity into Medicare to alleviate drug costs. The very law that created pharmacy benefits for people in Medicare, the Medicare Prescription Drug, Improvement and Modernization Act of 2003, banned the Secretary of Health and Human Services from negotiating drug prices with pharmaceutical companies. The ban on drug price negotiations in Medicare meant that drug companies could charge whatever they wanted. The result has been astronomical drug prices paid by taxpayers and patients.

The IRA removes the ban. More accurately, the IRA provides an exception to the ban.

Criteria for a Drugs Eligible for Medicare Negotiation

Only drugs that meet certain criteria will be up for negotiation, and they are eating this elephant one bite at a time: The first batch of eligible drugs is limited to just ten drugs based on Part D spending. Those first ten will be selected in 2023, with negotiated price applied in 2026.

The drugs that will be subject to negotiation are called “single source drugs,” meaning there is no generic counterpart. The IRA identifies “negotiation-eligible drugs” as single-source drugs with the highest expenditures in Medicare Part D (drugs you get from a pharmacy) and Part B (drugs that are administered in a hospital).

Drugs also must be FDA-approved for at least seven years before becoming eligible for negotiation, with the negotiated price not taking effect until nine years after initial FDA approval.  For eligibility, drugs called biologics, which are made with living organisms, must be approved for at least nine years and the negotiated price cannot be instated until 11 years after FDA approval. An example of a popular biologic drug is Humira. Humira was approved by the FDA in 2002 and averages $4,596.13 per pen at local U.S. pharmacies.

Let’s break it down a little. Lipitor, which treats high cholesterol, is not a single-source drug. Why? Because generic Lipitor, called atorvastatin, is available. In contrast, a perfect example of a negotiation-eligible drug is Eliquis. Eliquis helps reduce the risk of stroke and was approved by the FDA back in 2012. It is not available as a generic in the U.S. It is also ranked #1 in terms of drug spending in Medicare: over $9 billion in 2020.

What drugs would categorically not be included in negotiation?

How would the negotiation work?

The IRA details that the Secretary of Health and Human Services will create the administrative systems necessary to negotiate the price of drugs in Medicare with pharmaceutical manufacturers. The goal is for the Secretary to negotiate what is called under the IRA the maximum fair price for a drug.

What happens if the drug companies don’t play ball?

There are penalties for non-compliance. In other words, if the companies end up charging whatever they want to, then they will be forced to pay the government back and then some.

Keep in mind that drug manufacturers can withdraw drugs from the U.S. market, but I doubt they will. Why? Countries such as Canada and the UK demand much lower prices for almost all of their brand-name drugs, and Big Pharma happily sells to those countries anyway.

For about 20 years, it has been common for drug companies to increase brand name drug prices by 10% each year. In some of those years, such as 2009, the rate of drug price inflation was over 10 times the average rate. Medicare enrollees and taxpayers have borne the brunt of those increases. This chart published by AARP shows the insanity: 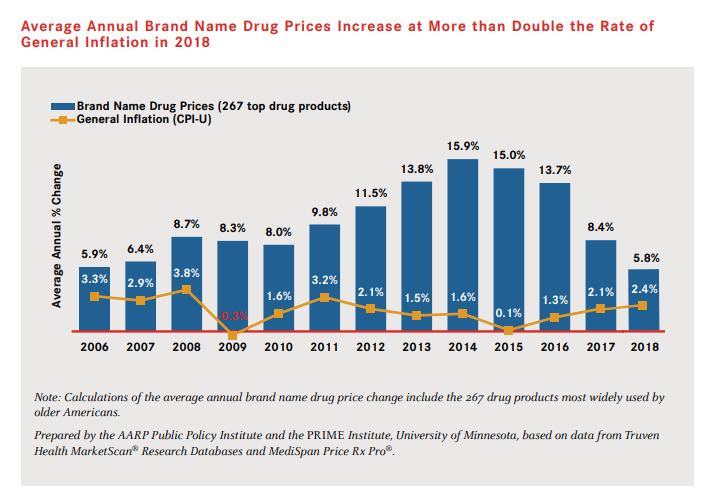 Those days are over.

Under the IRA, drug prices in Medicare will rarely rise faster than inflation. HHS will require that manufacturers pay a rebate if they increase drug prices above the Consumer Price Index (CPI). The U.S. has experience with safeguards against drug price increases through its policies in Medicaid. The Medicare rebate will be calculated to negate additional revenue a manufacturer might earn from increasing a drug price. These inflation protection policies will begin in 2023.

This is very straightforward. The IRA will cap out-of-pocket spending to $2000 a year.

Until now, the law forced older Americans on Medicare to share in the expense of what is aptly called “catastrophic” drug costs. In 2021, about 1.5 million Medicare enrollees paid at least $6,500 a year in out-of-pocket drug costs. Worse, after that threshold, they were forced to pay 5% of drug costs no matter how high the totals went. For example, a person with cancer may incur $200,000/year in drug costs, for which they would have to pay 5% or $10,000. That would mean a total of $16,500 a year.

Those days are coming to an end because of the IRA.

Furthermore, the monthly price for insulin will finally be capped in Medicare at $35.

What if you’re not on Medicare?

That’s the bad news. For the approximately 180 million Americans with private health insurance and, worse, the 30 million uninsured people, the crisis of high drug prices will go on.